All-Poland harvest festival celebrations, with the presence of the party and state authorities were protected by the Security Service from the preparation stage.

Apart from militia officers many officers in civilian clothes were present at the stadium. The event was being photographed and filmed. For this reason it was possible to find a film which enabled a partial reconstruction of the events at the 10th– Anniversary Stadium. The film is currently stored in the documentation of the Security Service in the Institute of National Remembrance. 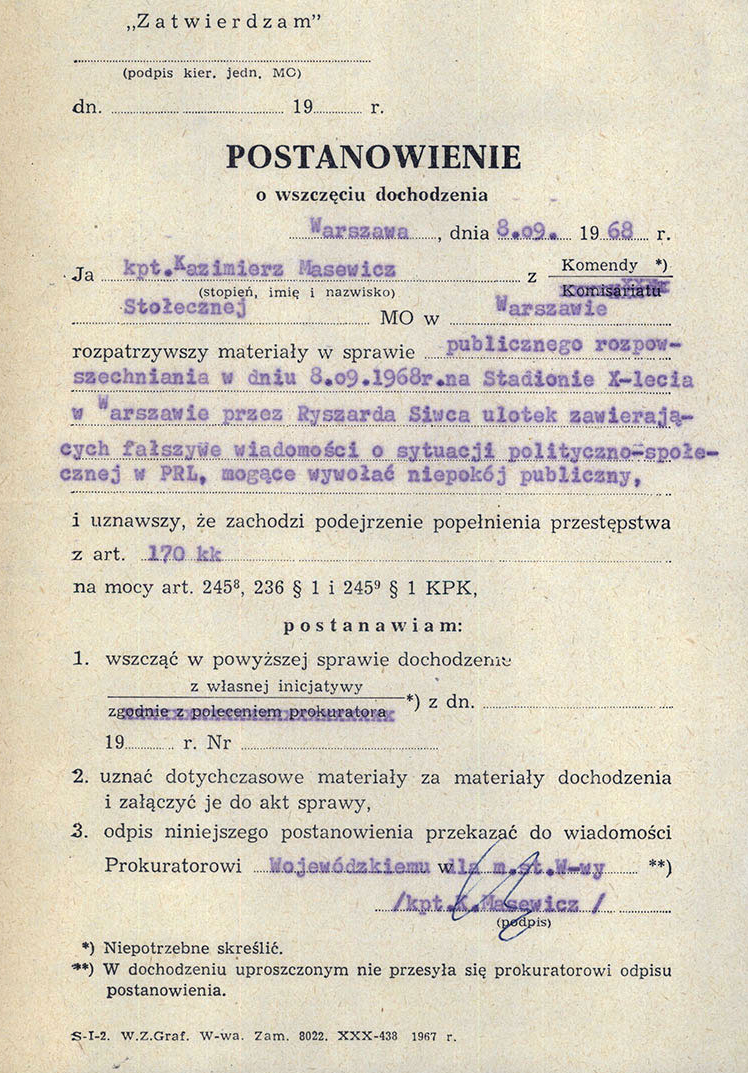 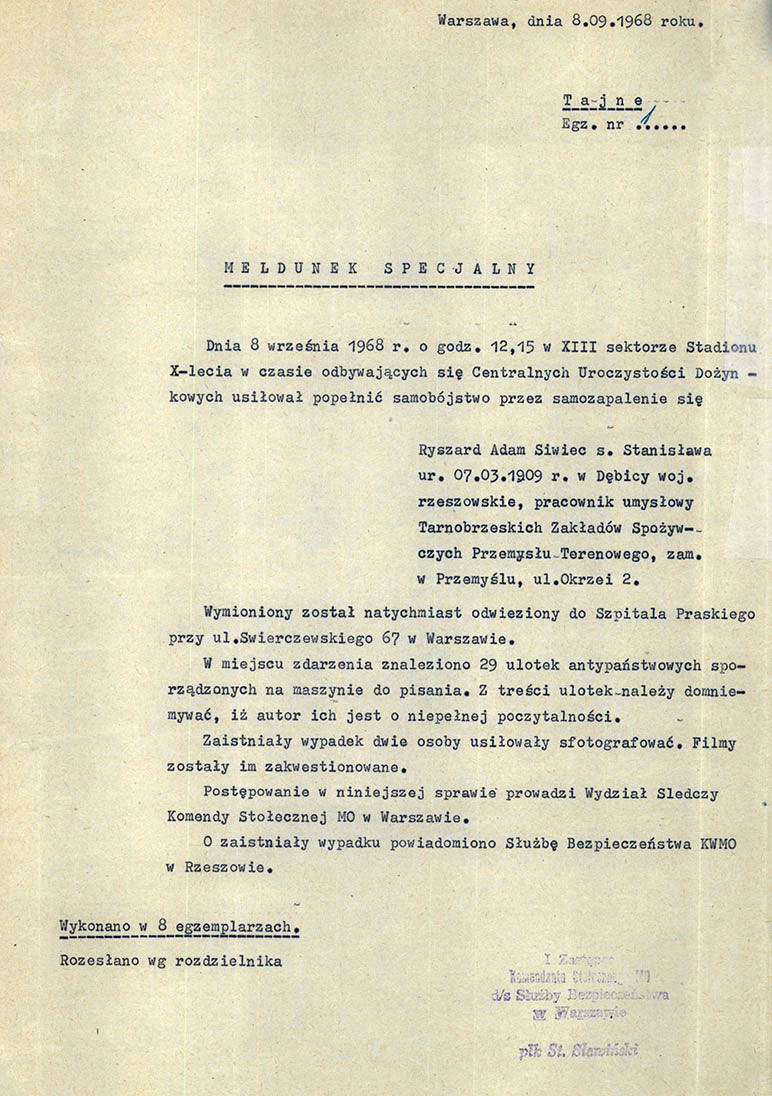 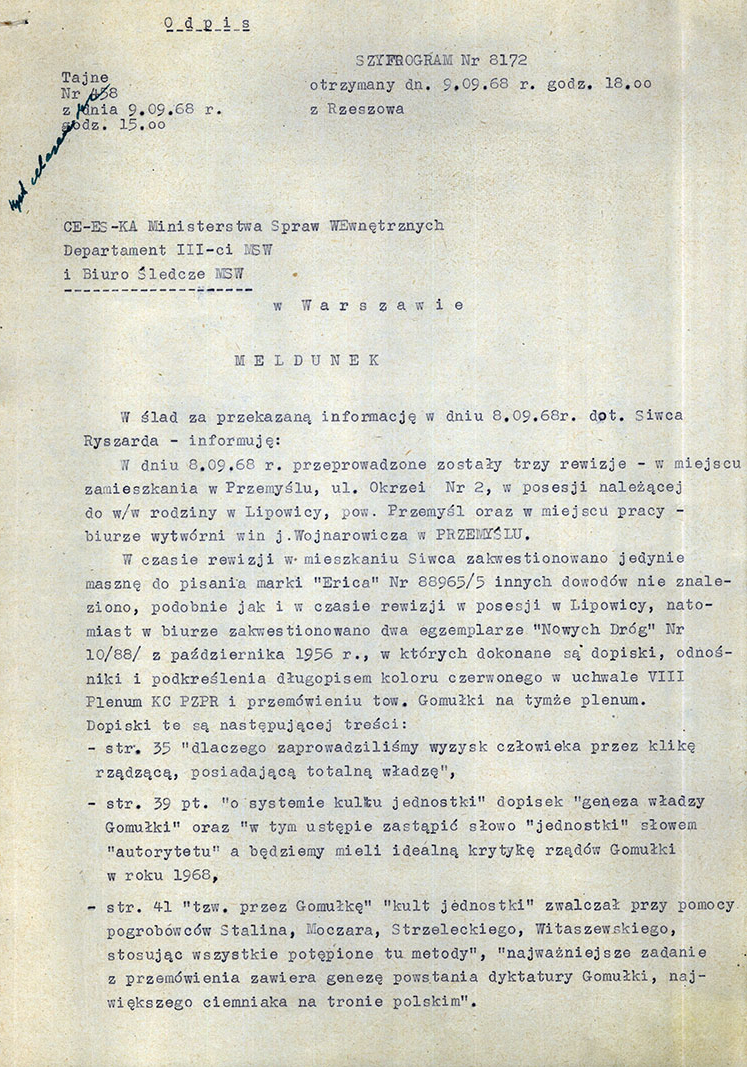 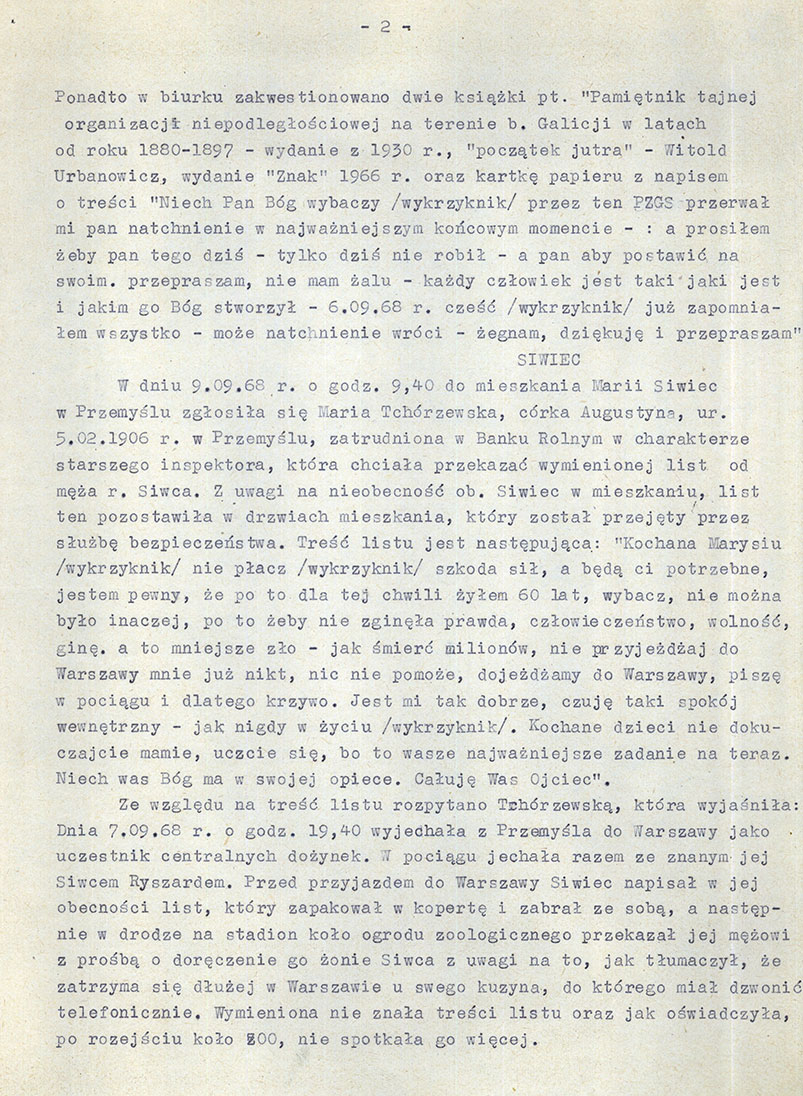 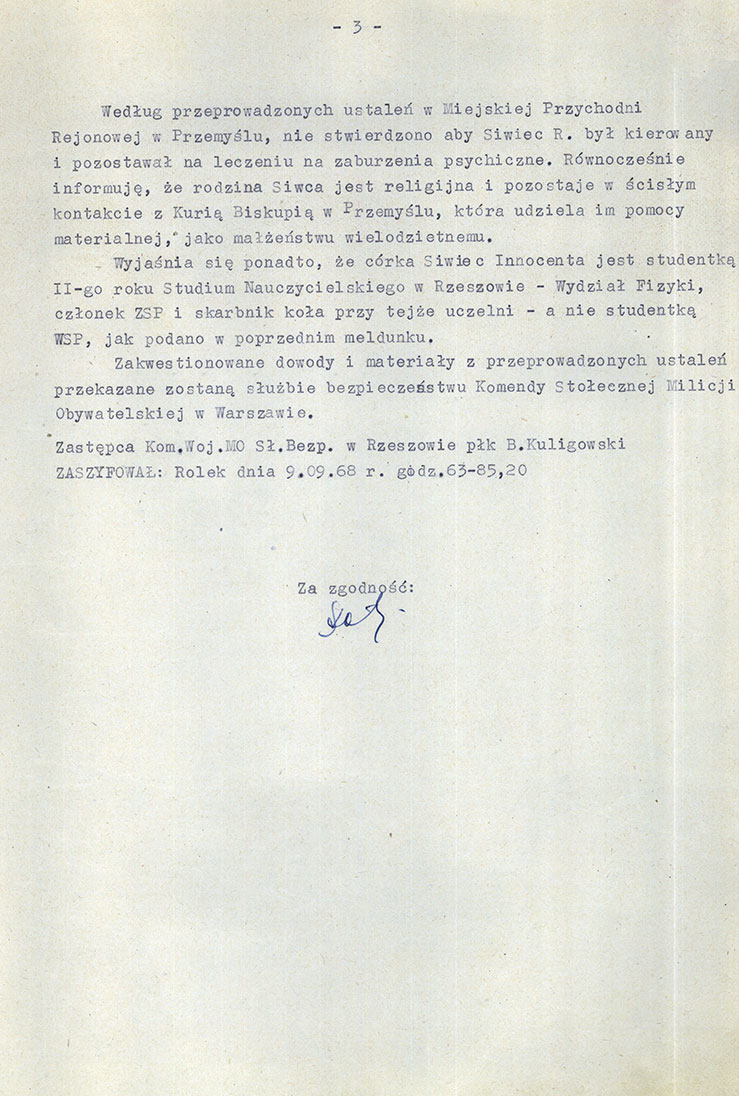 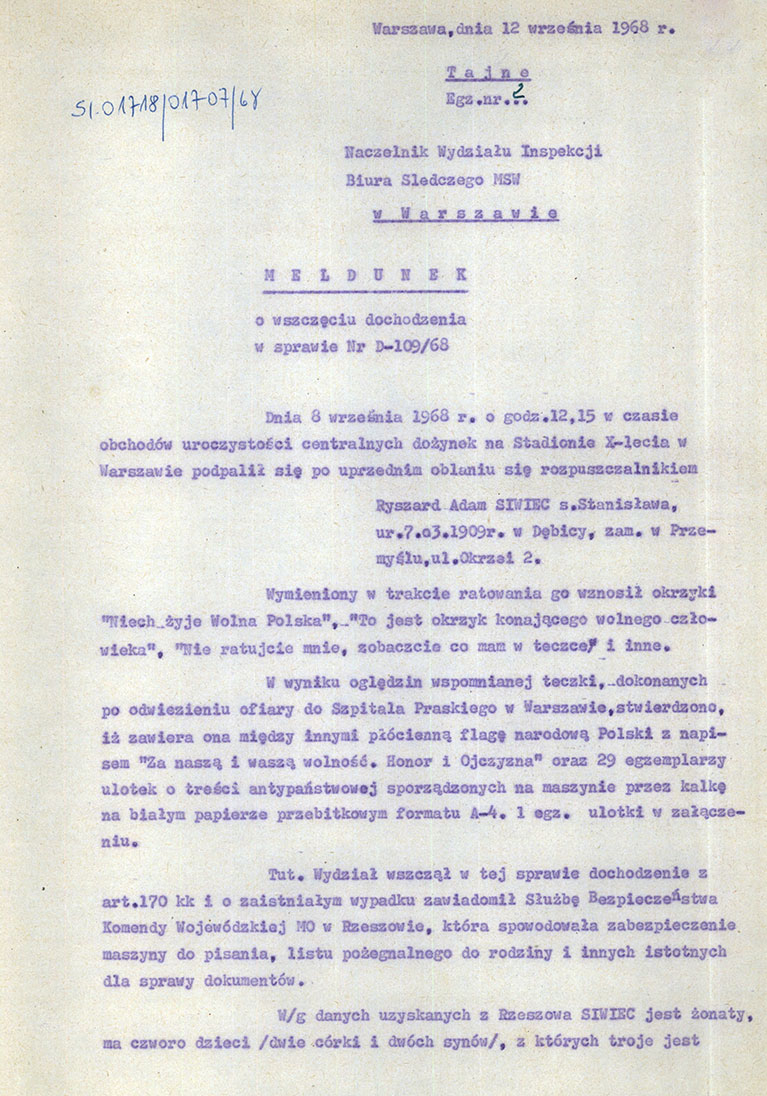 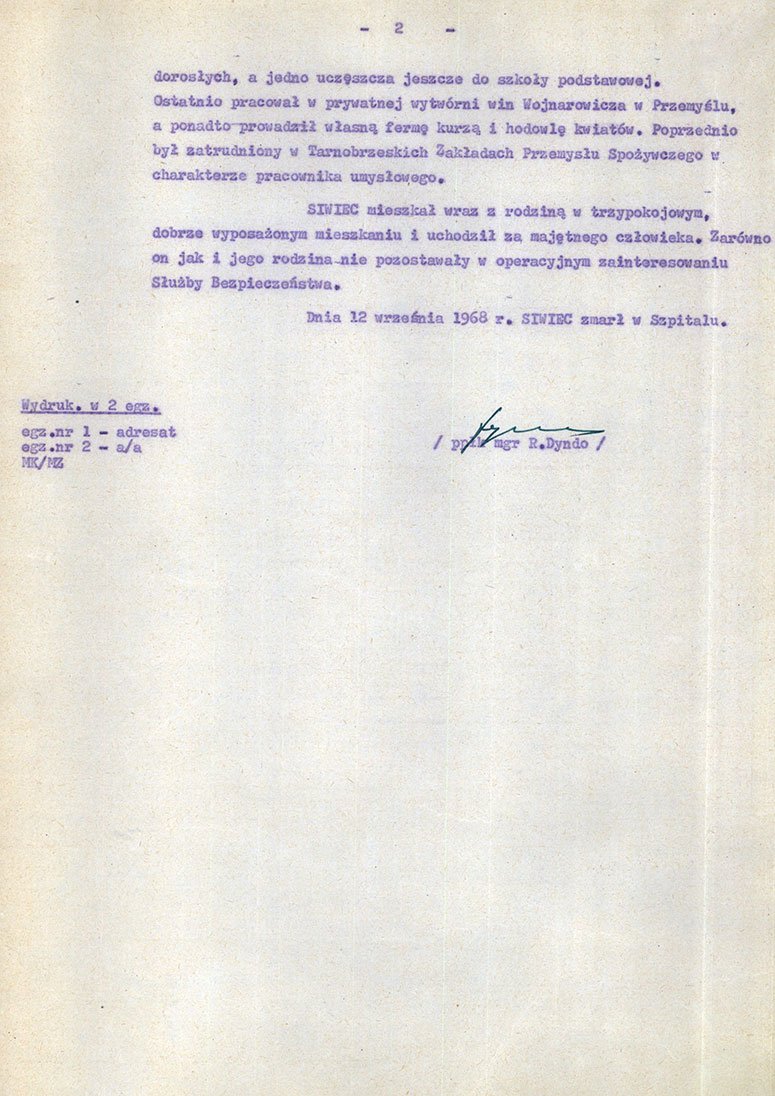 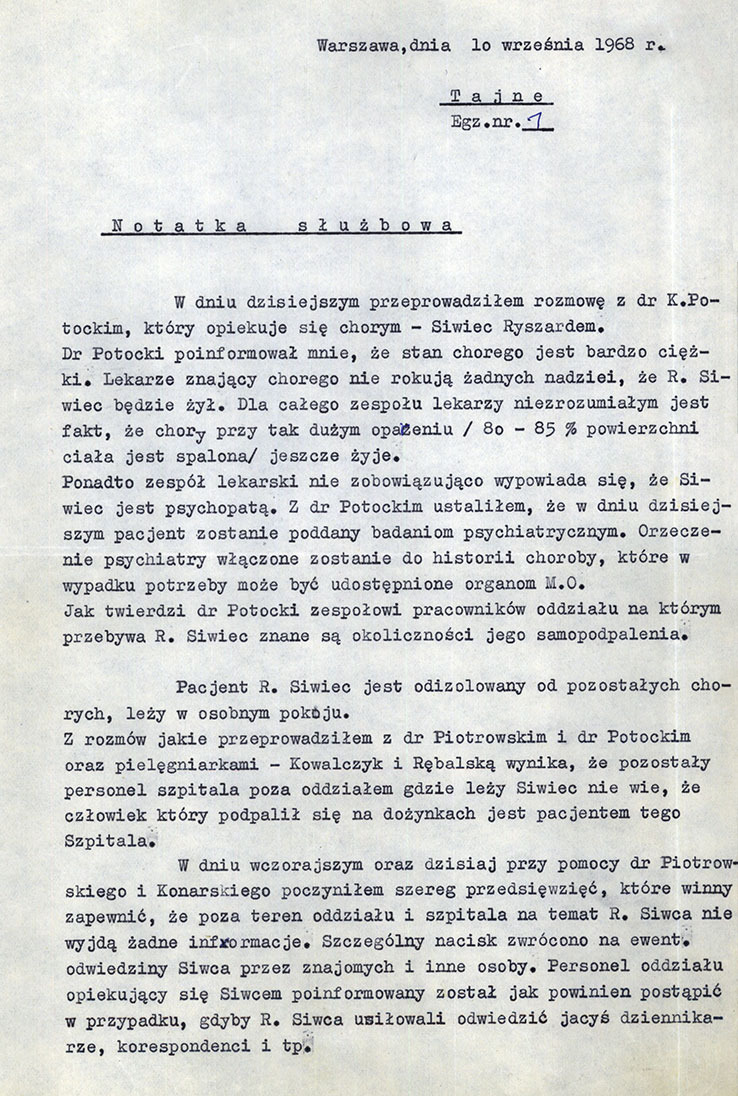 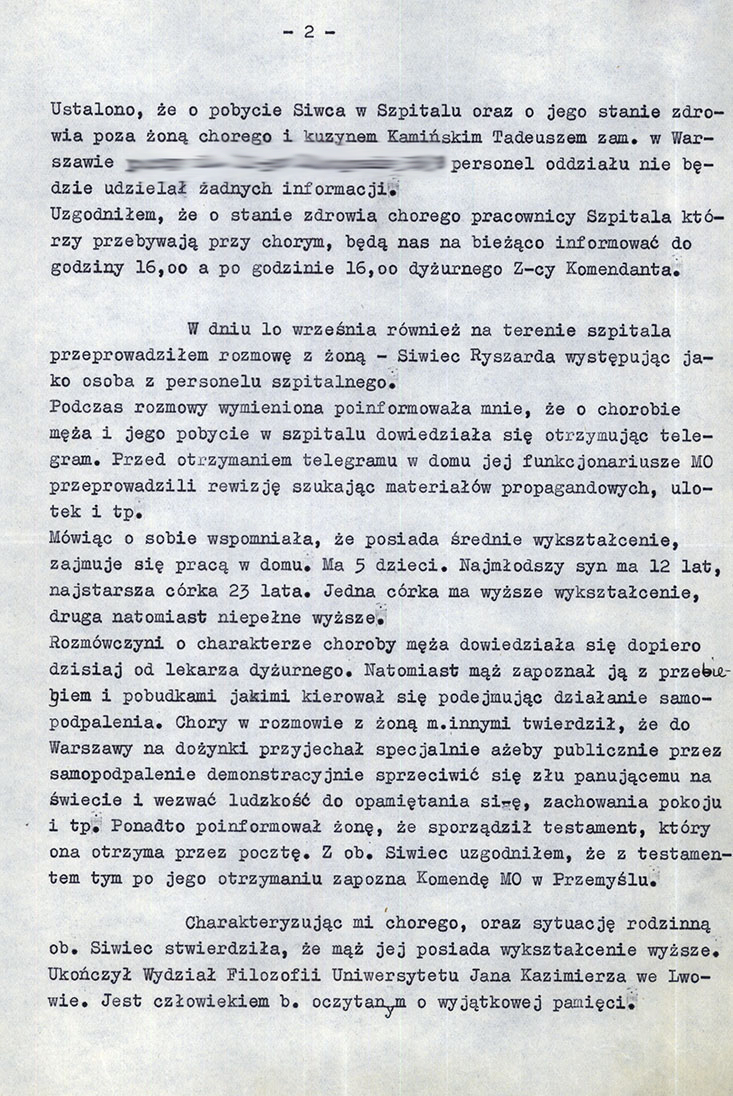 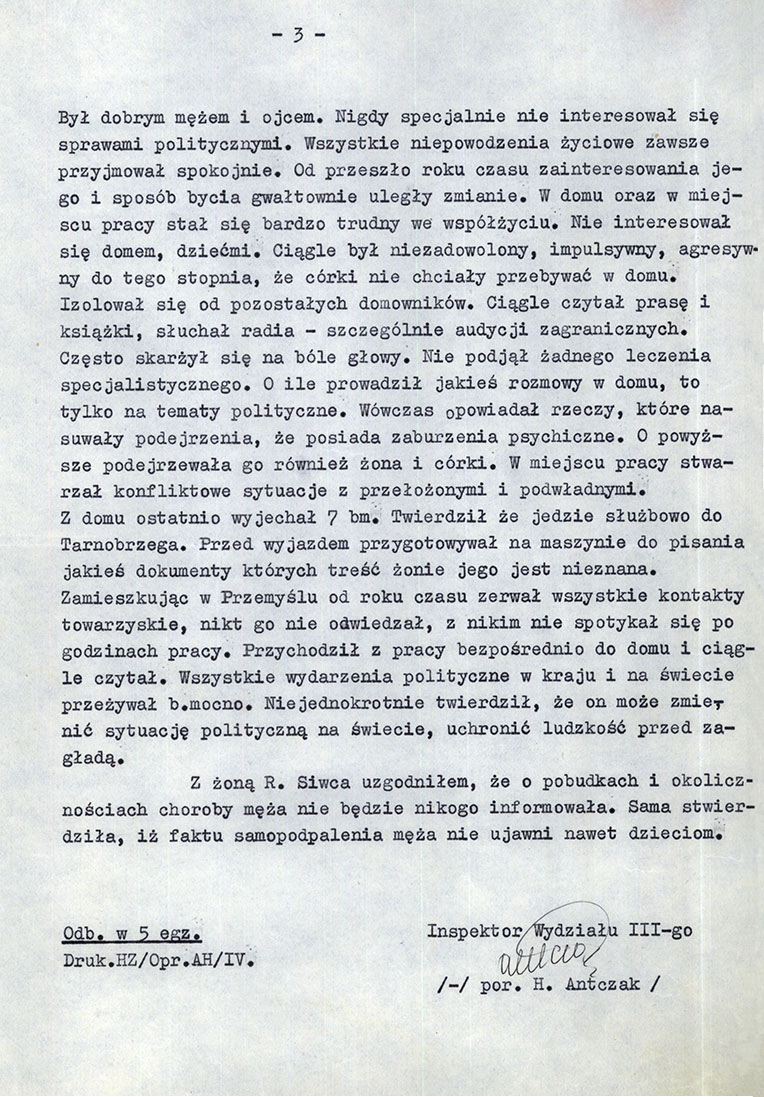 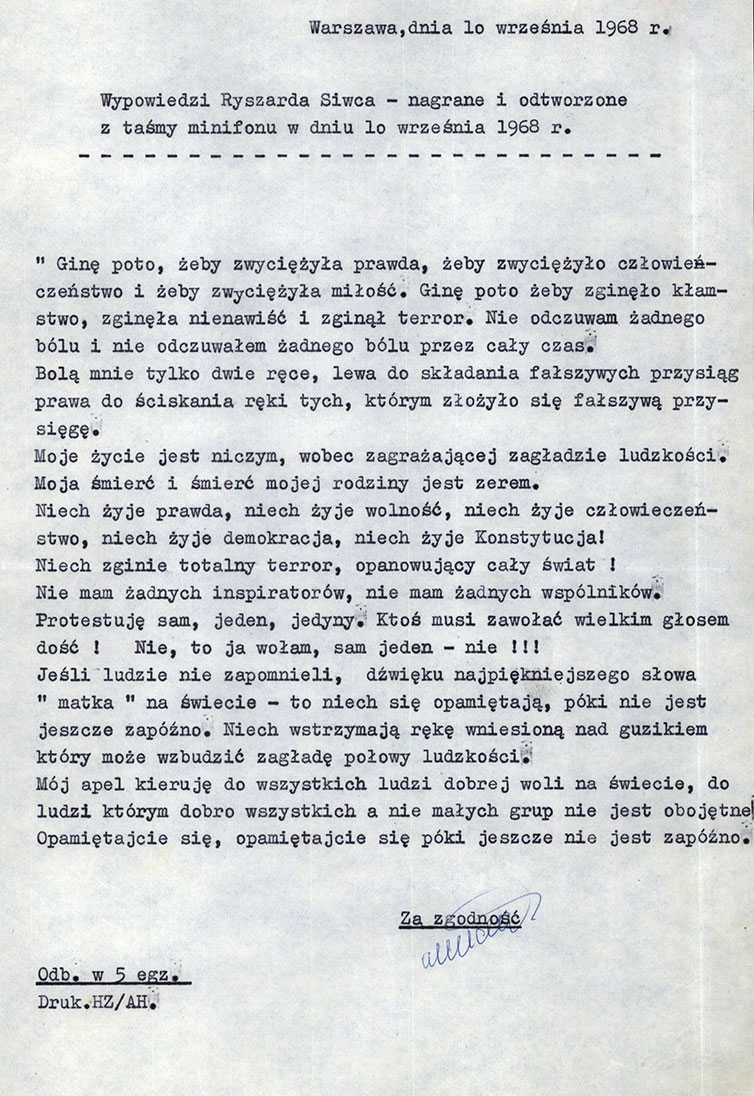 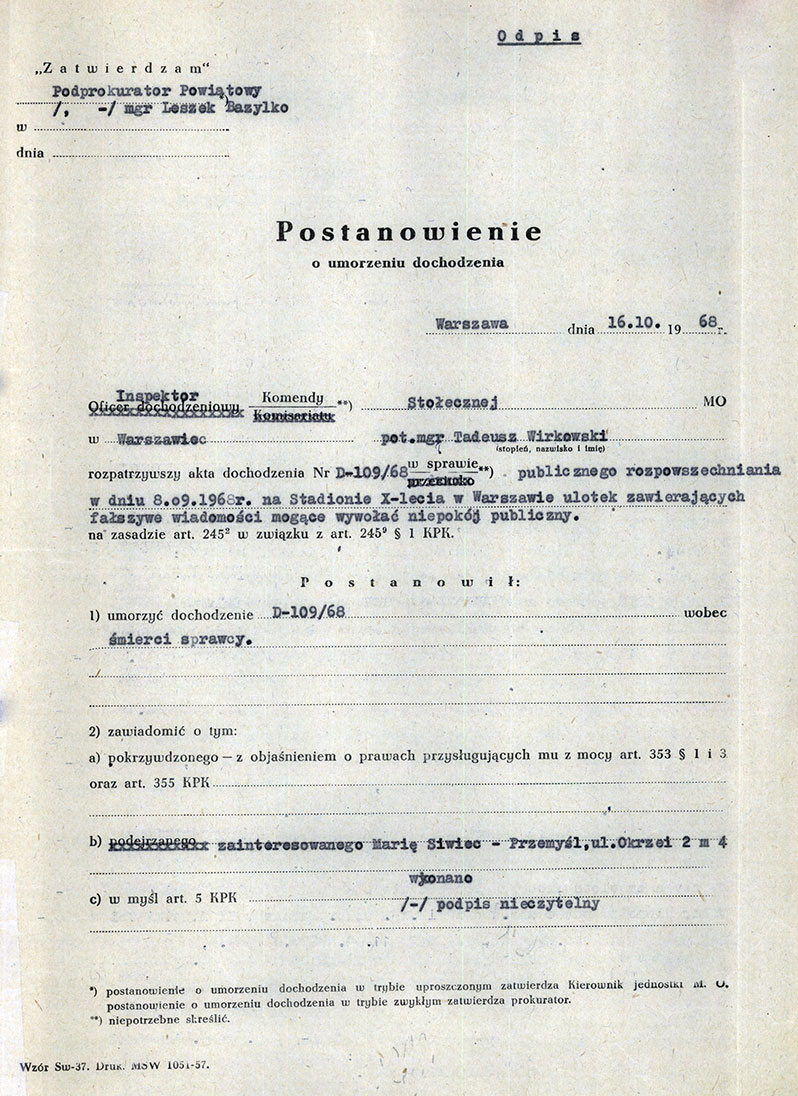 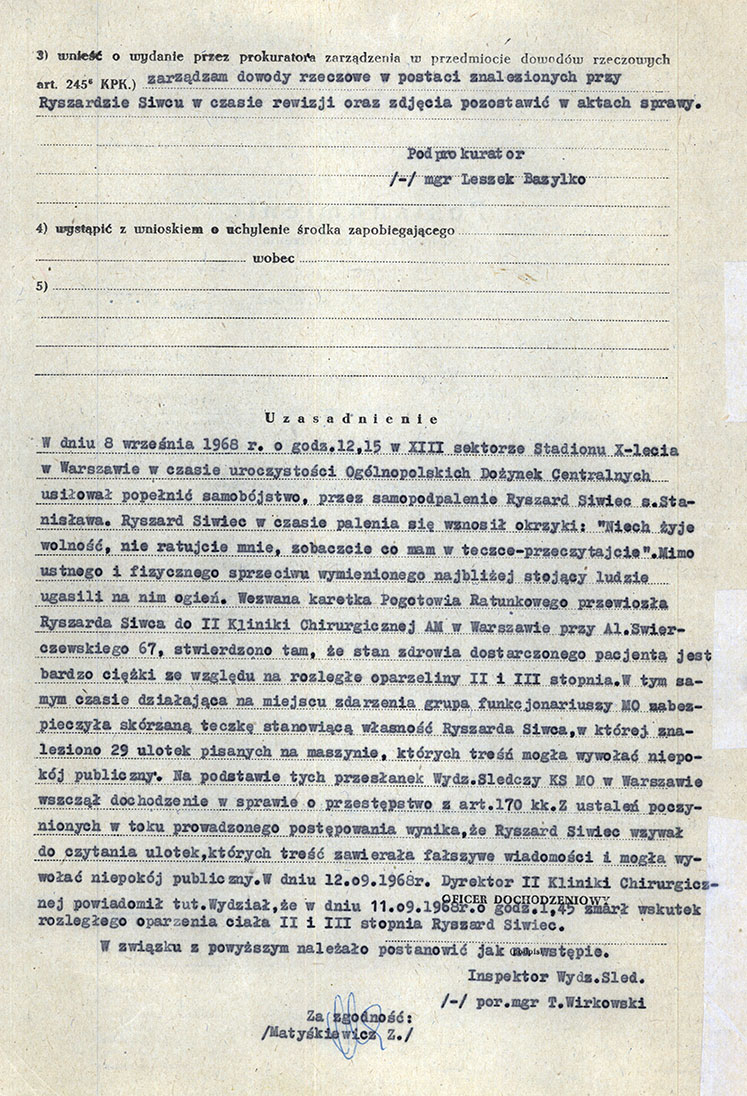 First steps taken by the Security Service officers directly after Siwiec had set himself on fire was securing the scene. Also, they forbade people from photographing and confiscated several negatives. Further activities took place outside the stadium. The investigation against Ryszard Siwiec was launched on the same day. He was accused of ‘public distribution of leaflets containing false information on political and social situation in the People’s Republic of Poland which might have caused social unrest’. The investigation was conducted by the Security Service officers from the People’s Militia Regional Headquarters in Warsaw, first by Capt. Kazimierz Masewicz and then Lieut Tadeusz Wirkowski. On the very same day the Security Service searched Ryszard Siwiec’s house and workplace. At the hospital Ryszard Siwiec was isolated from other patients and only appointed medical staff had access to him. The staff were told not to speak about it with anyone. Even his family had difficulties in visiting him. The patient was constantly monitored and all his words were recorded.

My life is nothing in the face of the destruction that humanity is threatened with. My death and the death of my family mean nothing. Long live the truth, freedom, humanity, long live democracy, long live Constitution! Die total terror spreading around the world! I don’t have any accomplices. I protest on my own. There has to be someone who will cry out: stop! No! I’m crying out on my own – no!

An excerpt from shorthand notes on Ryszard Siwiec’s statement, taken in hospital on 10th September 1969.

Finally the investigation was dismissed on 16th October 1968 due to his death. The Security Service imposed a complete news blackout on the events at the 10th-Anniversary Stadium. They wanted to hide Siwiec’s reasons for his actions and they spread rumours that he was insane.

II
On the ward buzz, noise, hustle and bustle, everyone busy.
I peeped into the room: the patient was separated from the whole ward and was in the surgical dressing room. The bed was pushed away from the wall, around it there were stands, drips, and the patient like a mummy, in bandages. Conscious.

I
When my colleague explained what had happened people started saying: crazy, psychopath, and so on.
One of them said angrily that the whole Polish nation had been so indoctrinated that when Buddhist monks set themselves on fire in protest against something we called them saints but when one of us did the same thing for, say, political reasons we called them psychopaths, loonies.

II
Everyone was told that everything the patient said had to be recorded, repeated. We had to watch who was coming and if someone came to visit, we had to instantly make a phone call.
The code digit was ‘0’ and after dialling this digit someone from Mostowski Palace was supposed to pick up the phone immediately.
We had different attitudes towards this but no one really made a call.

III
A few weeks after this situation at the stadium I was called, invited together with fire fighters who participated in the rescue action, to the Police Headquarters, where a meeting accompanied by a glass of cognac took place. We were thanked; I received a bonus and the boys – savings books.

IV
And of course we were once again reminded to hold our tongues.
We were told the man who had set himself on fire died three days after the incident. That he was a freak from Przemyśl, not fully sane, and he wasn’t such a poor man but he started to go crazy for some reason. And that he was simply an enemy of our system.

The medical staff as well as a militia officer and a fireman who were present at the Stadium recall the events on the first days after 8th September.
This fragment comes from the documentary by Maciej Drygas “Hear My Cry”.