PRL and the Prague Spring

The Prague Spring – a term used to describe a period of political liberalisation in Czechoslovakia.

Alexander Dubček aimed to introduce ‘socialism with a human face’. This approach did not assume that the Communist Party of Czechoslovakia was to resign from running the country but intended to introduce elements of pluralism. Social life was reviving, numerous political clubs and public organisations were being created, cultural life was flourishing, preventive censorship was abolished, and the press and television functioned in a new way. Rehabilitation processes of people sentenced by communist authorities began.

The residents of Prague are sitting on a Soviet tank, 21st August 1968, Wenceslas Square in front of the National Museum building 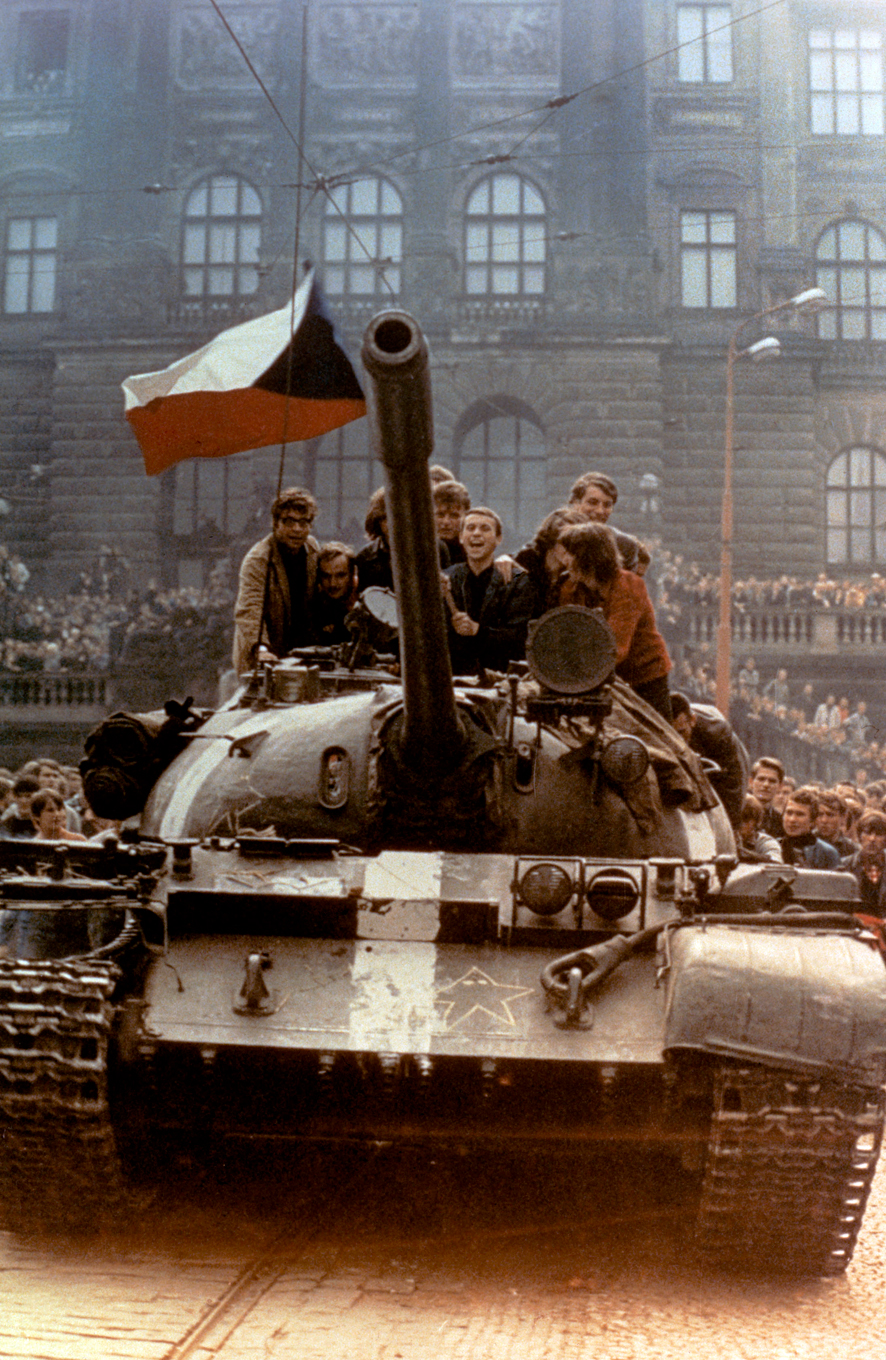 Destruction in the streets of Prague, 21st August 1968 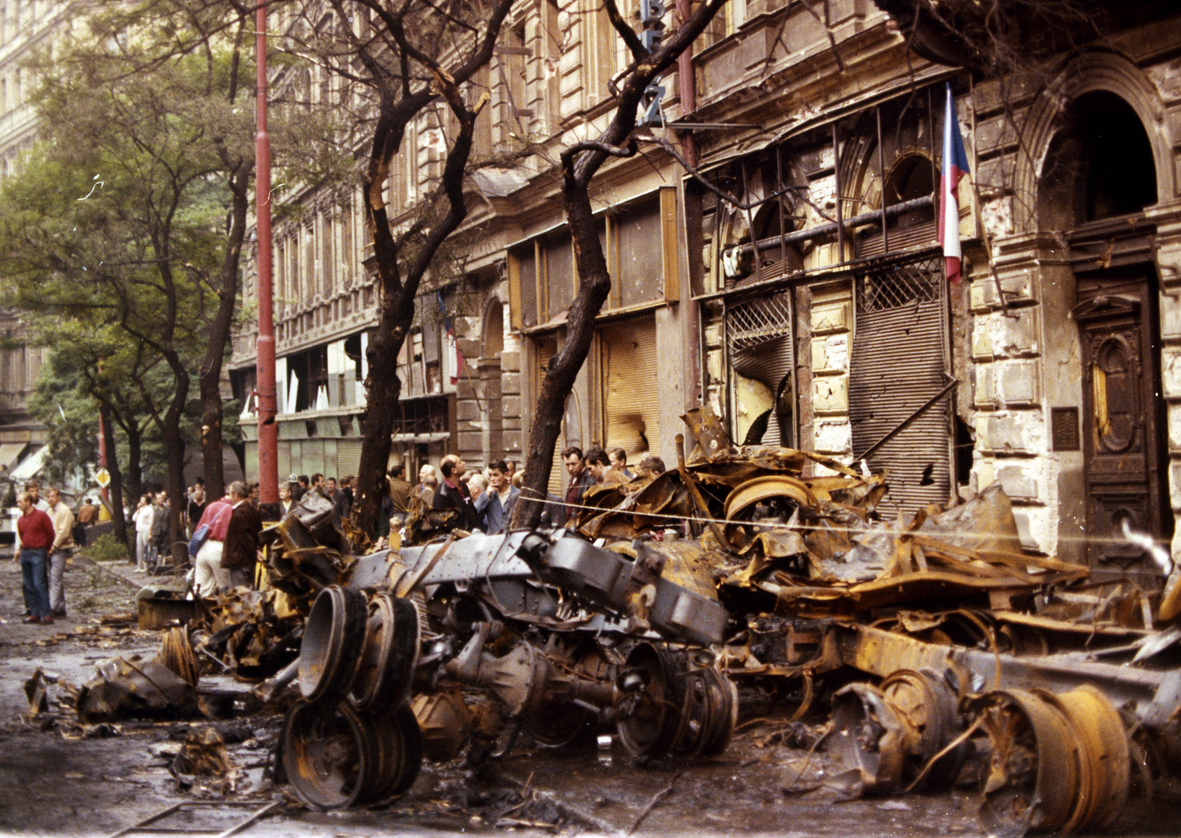 Polish Army Units in the town of Hradec Králové 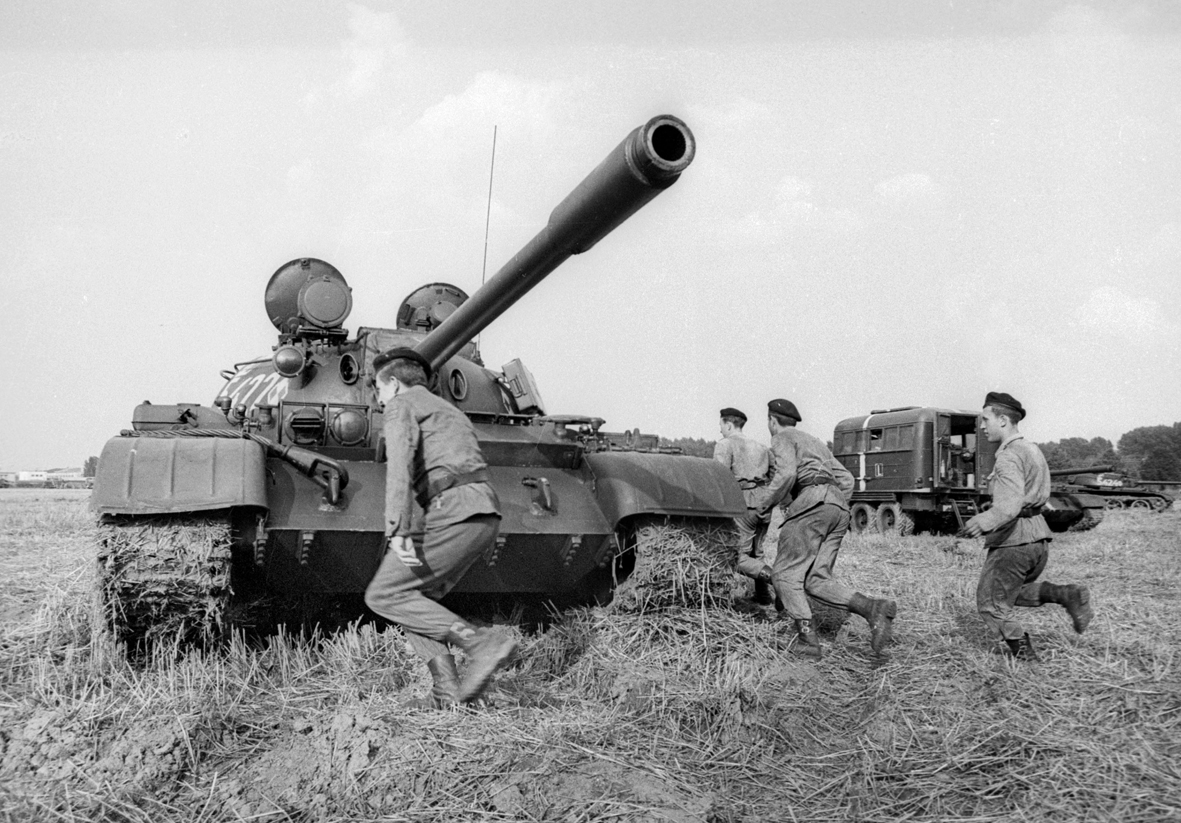 The Prague Spring did not go unnoticed in the People’s Republic of Poland. Both communist authorities and the society reacted enthusiastically to the situation at the southern neighbour’s. Unfortunately, despite propaganda efforts the government’s and the citizens’ reactions did not coincide. The situation was influenced by the recent events in Poland, in March 1968.

For the Polish society the anti-Zionist campaign which started in 1967 as well as increasing limitations to freedom of speech (the symbol of which was the act of taking off, at the end of January 1968, the performance of ‘Dziady’ directed by Kazimierz Dejmka in the National Theatre) were a sign of abandoning the mottos from October 1956 promoted by Władysław Gomułka’s government. They definitely contrasted with the reforms in Czechoslovakia and did not indicate that the Polish authorities were inclined to take similar steps.

These predictions were confirmed in the acts of brutal pacification of students in Warsaw on 8th and 11th March 1968, and then in Gdańsk, Kraków, Łódź, Poznań, Gliwice and Katowice. At that time a call “Poland is waiting for its own Dubček” was coined. Not only was it a sign of solidarity with Czechoslovakian transformations, but also hope for a similar scenario to happen in Poland due to the resistance movement and despite the difficult situation. After all, it was protesting students in Prague that opened the way to changes in the party leadership and reforms. 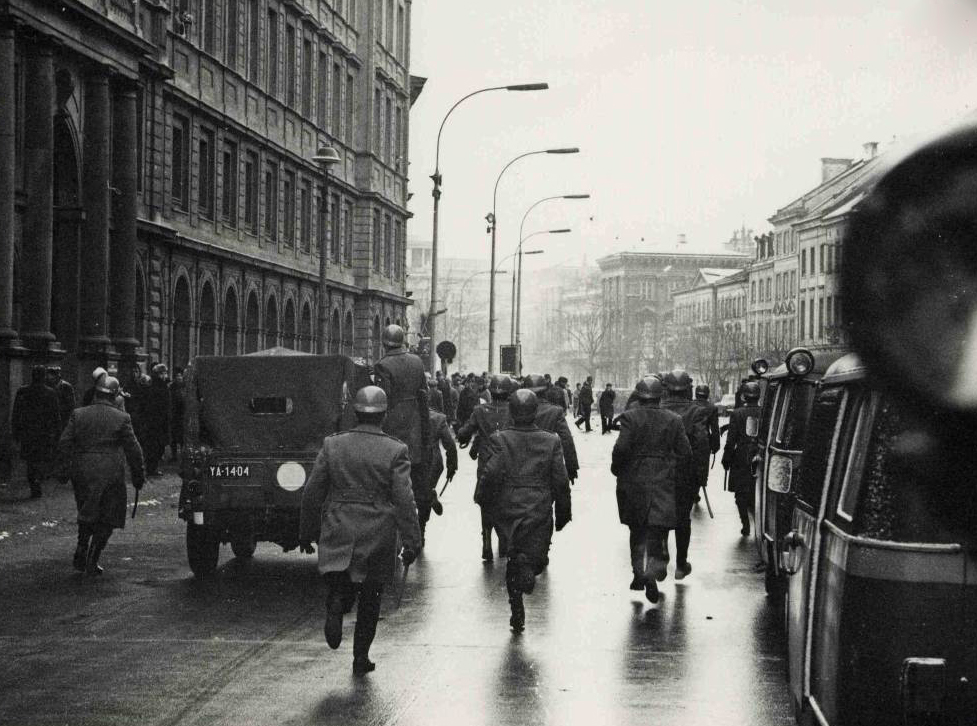 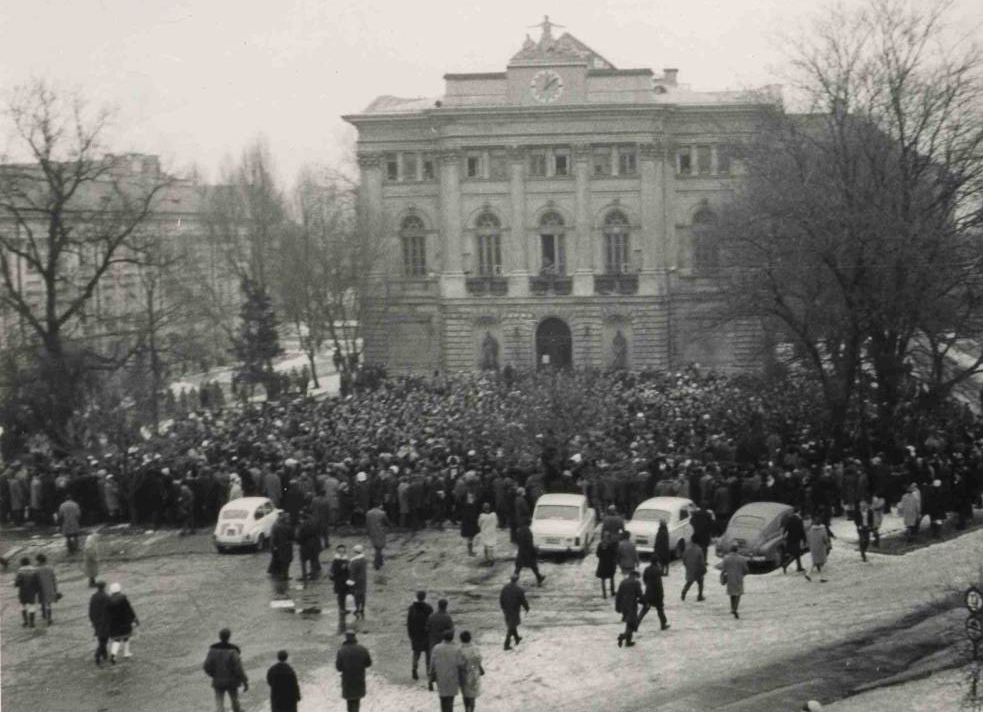 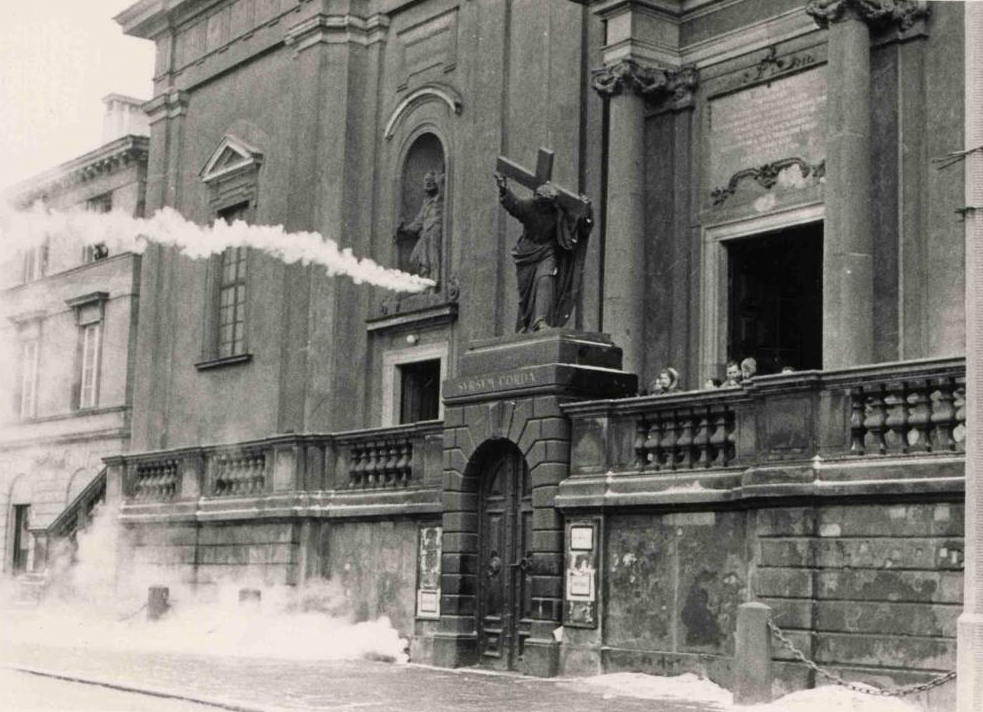 As a matter of fact, the protests of Polish students were very popular in Czechoslovakia. A number of universities passed sympathy resolutions, and articles condemning the repressions of students and people of Jewish origin by the authorities in the People’s Republic of Poland were published in the press.

The protests of students and intellectuals spread across the country, but until the end of March 1968 they were pacified by the authorities. Students (hundreds of whom were conscripted into the army) and teachers (the Warsaw University lecturers received job offers from their Czech colleagues from the Charles University in Prague) were being removed from universities, the independence of universities was limited, and unruly students were replaced with the politically correct ones. In media a smear campaign was launched against ‘troublemakers’ and ‘Zionists’, who were being blamed for ‘deceiving and leading other students astray’.

Important events have taken place in our country in the last ten years. A considerable part of the student population in Warsaw but also in other academic centres in the country have been deceived and led astray by enemies of socialism.

These enemy forces have sown the seeds of unruly anarchy and law-breaking practices amongst students. By means of provocation they agitated the minds of some students, pushed for street fighting and bloodshed.

Illegal student gatherings and street demonstrations triggered a question: What is happening? Why are students protesting against the state authorities?

The attempts to use Mickiewicz’s poetry, which arose from patriotic fighting against the tsarist oppression, in order to slander Poland should be considered political fraud as it misrepresents the deepest, democratic and progressive meaning of Mickiewicz’s artistic work.

Now, when the alliance with the Soviet Union, friendship with the reborn and socialist Russian nation is and will remain the foundation of safety, independence and the guarantee of development for Poland, it is our responsibility to eradicate from our minds, without distorting and misrepresenting history, relics of old and bygone conflicts instead of reinforcing them and causing trouble. This is a patriotic and internationalist imperative – the two features which belong to the most beautiful tradition of the Polish nation and the Polish working class.

It is easy to imagine what the face of the Polish nation would be like if in 1944 instead of ‘ignoramuses’ the ‘enlightened’ had come to power. We would live in Poland without the Western Territories, in conflict with the Soviet Union, poor, backward, overpopulated, dependent on Germany and imperialist empires, would be a pawn in their game, would mean nothing because there wouldn’t be a place for such Poland in contemporary Europe.

The cover of a propaganda publication 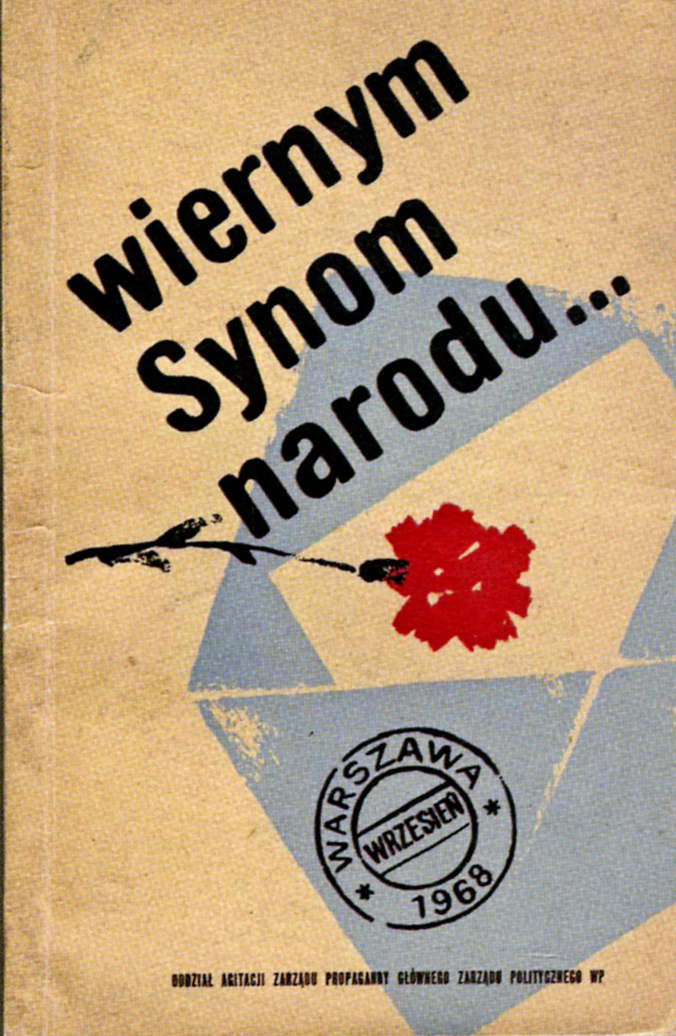 The First Secretary of the Central Committee of the Polish United Workers' Party Władysław Gomułka’s attitude towards the Prague Spring was negative from the very beginning. He warned Alexander Dubček against dangerous effects of the reforms which were being introduced. He was worried about possible deconstruction of the Soviet Bloc and probably for this reason as the events unfolded he vehemently supported the intervention of the Warsaw Pact forces behind the southern border.

Anti-Czech propaganda campaign was spread all over the country. By means of the whole media machine (press, radio, television) the society was being threatened with consequences of Czechoslovakian reforms and, above all, threats from ‘West German revisionists’. Meetings of POPs [pol. podstawowa organizacja partyjna, e.g. basic party unit] were being organised on a large scale where it was stated that ‘Zionists’ and ‘revisionists’ were responsible for reforms introduced at our southern neighbour’s and their sole aim was to destroy socialism.

There isn’t room for fanfares or enthusiasm here. There is room for concern, the type of concern one feels when nursing a sick person and waiting for them to stand up on their own. There is determination, the type of determination you have when you try to save a drowning person – the day will come when a convalescent is able to see and understand who wanted to save them and who wanted them to drown.

We look to the future confidently. It’s because we managed to, just in time, frustrate the plans of the Czechoslovakian counter-revolution supported by, and to their fury, imperialism and international reaction, particularly the West German one. This way we are carrying out the motto: “No more Munich! No more September!”, “For your freedom and ours”. Long live our Homeland – People’s Republic of Poland! Long live people’s army! Long live our sister Czechoslovakia! Long live indissoluble Polish and Soviet friendship! Long live peace!

After the intervention in Czechoslovakia and despite information conveniently prepared by the propaganda machine, the voices of outrage and condemnation dominated in Poland. The Security Service which meticulously made records of riots and disturbances supporting Czechs and Slovaks, as part of the operation codenamed “Podhale”, only between 21st and 31st August recorded 2147 leaflets and 86 “enemy” inscriptions against the invasion. The Security Service intercepted hundreds of anonymous letters protesting against the intervention. About 80 people were detained and several hundred ordered to attend ‘preventive and cautionary talks’, several dozen sentenced to up to three years in prison.

An inscription on the wall against Władysław Gomułka’s Czechoslovakian policy 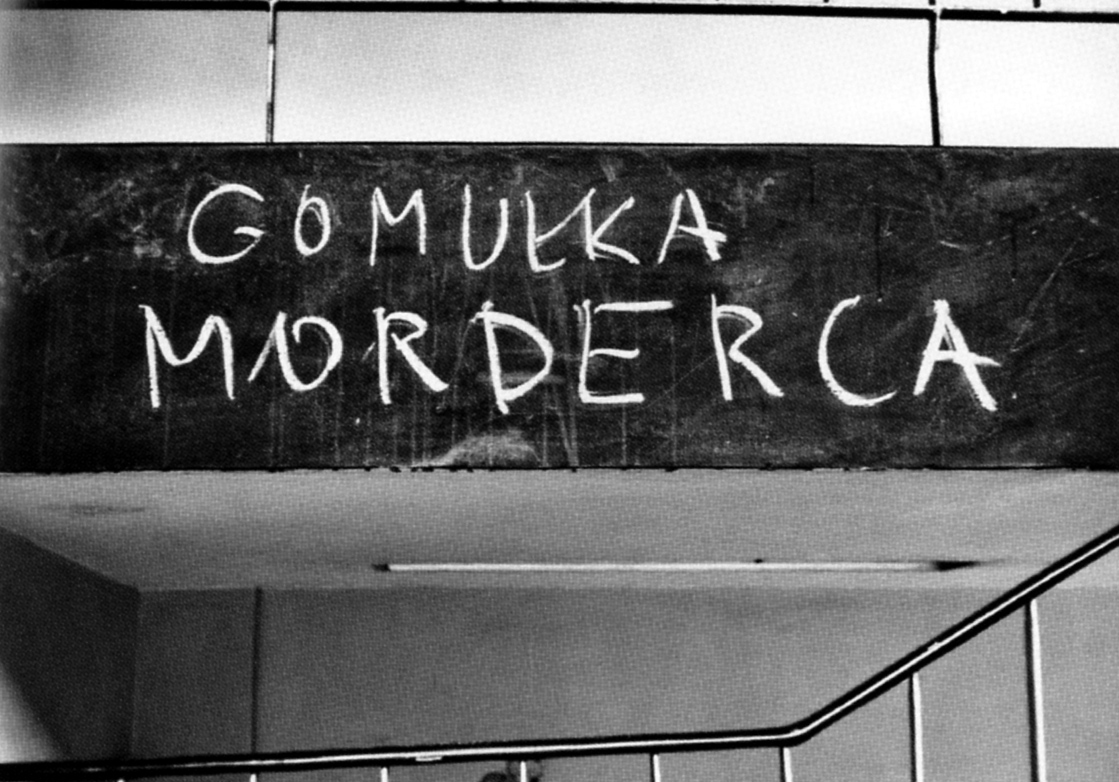 One of numerous leaflets against the intervention 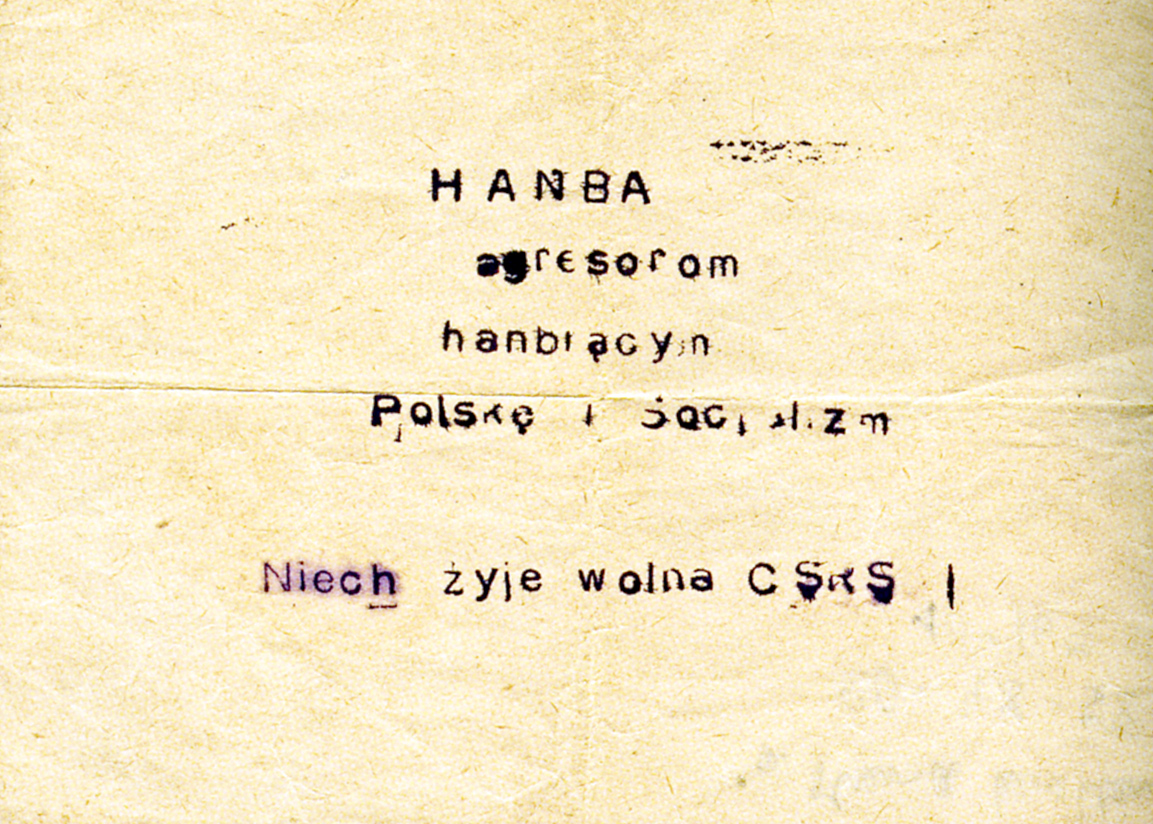 Flower laying at the Czechoslovakian embassy was a form of protesting and demonstrating solidarity. Intellectuals and the people of culture protested too, although these were rather individual cases.

The best-known was eminent writer Jerzy Andrzejewski’s letter to the president of the Czechoslovakian Writers’ Association Prof. Eduard Goldstücker. 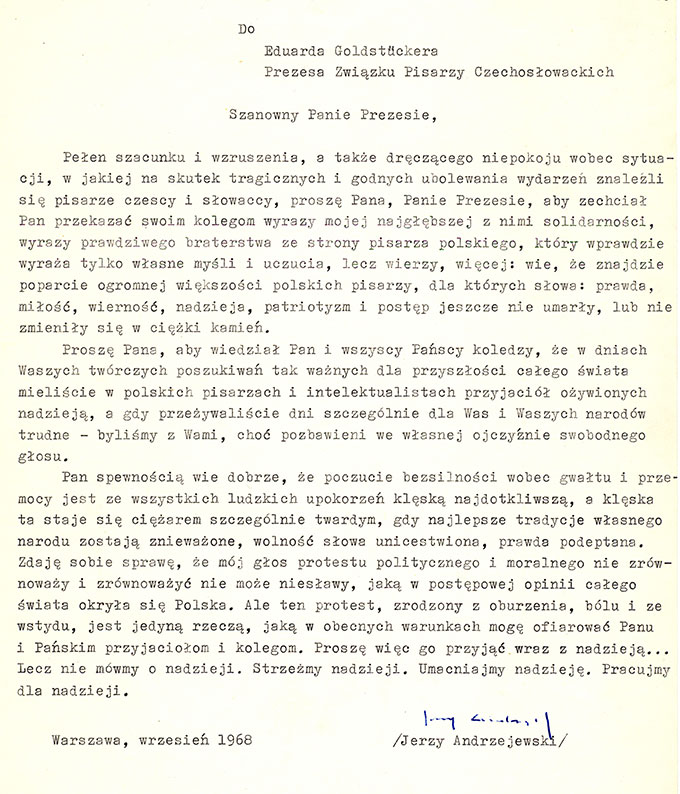 Sławomir Mrożek, who was in Paris at that time, published his statement in “Le Monde” journal. Jan Lebenstein, a painter and a graphic artist, also submitted an open letter. In Paris “Kultura” Zygmunt Mycielski, a composer and a columnist, published “An open letter to Czech and Slovakian musicians”. Kazimierz Wierzyński, an excellent poet, published a shocking poem “For Jan Palach’s death”.

we thought they were different
that it was there, not here
and things were done differently
and very few were ready to cross the ocean
to find them still alive
read their charred faces
and their meaning

no one from the remote world
stops him from burning till the end
they are sleeping in the squares, squatting
until chipped cinder turns into ash

Some academics from universities and the Polish Academy of Sciences returned their party membership cards in protest. Amongst those who withdrew from the Polish United Workers' Party were Bronisław Geremek, Krystyna Kersten and Tadeusz Łepkowski.

The most dramatic act of protest against the Warsaw Pact’s intervention in Czechoslovakia was Ryszard Siwiec’s act.